Tiffinie Helmer's new book "Hooked" from her Romance on the Edge Series is now available. Please check it out. Her stories are wonderful reflections of real characters surviving real trials in life in Alaska. And oh yea, there's lots of sexy goodness too! I have read all her books to date published and have loved them all. 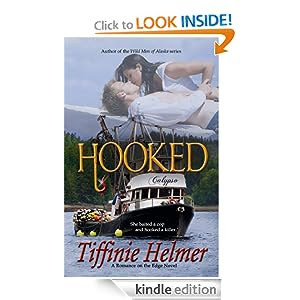 Email ThisBlogThis!Share to TwitterShare to FacebookShare to Pinterest
Hope you are all doing well. It has been a rushed and discouraging time over the last few weeks. Life can be so hard at times. I'm thankful for my family and my friends and all those people that make living worth the troubling times that come at us. I have many hand written pages of Drifting Sands to pull together this weekend and add to the current draft. My time line has been thrown by life in general but I am determined to get back on track and soon. Much love to you all and have a lovely weekend.

I didn't get the number of comments that I was going for but that doesn't matter here is a small taste of things to come in Drifting Sands. Let me know if you enjoyed it.

Marcus could feel Justin pulling away. Putting his heart and his emotions back in that hidden closet where it was locked away from him and the rest of the world. He had let himself hope that he’d finally broke through the locked up tight facade tonight. The Justin who had played in the ocean like a kid was gone. The lover who had opened up and shared himself was gone too.
The ache in Marcus’s heart left him feeling restless long after the soft snore escaped Justin’s warm body beside him. Scooting closer Marcus wanted nothing more than to wrap himself up tight against the other man in his bed. Justin jumped in his sleep then reached out and pulled Marcus closer. He sighed in his sleep, never waking. Marcus couldn't breathe for a moment. This is what he had dreamed of for so long, to be this close and intimate with Justin. Getting to know the man himself was such a joy and made the ache in his heart deepen.
This close, Marcus could see the few gray hairs in the sandy blond hair and tiny fine lines around his eyes. None of it took away from his attractiveness. In fact those things as well as the slight shadow beard on his strong jaw line had Marcus’s cock filling again.
Closing his own eyes and willing his errant cock to go to sleep, Marcus finally relaxed and just enjoyed the warmth of the body next to him and the possibilities that tomorrow might bring, if only Justin would let it. He drifted off to sleep thinking this is the way he wanted to go to sleep every night for the rest of his life.
The acidic smell of smoke woke Marcus. He couldn't have been asleep for very long, an hour maybe two. The thought of where there’s smoke…brought him fully awake quickly. The sun still wasn't up but it was early morning. The sky was just getting light and it shown in the window where he’d seen the moon earlier. It was enough light that he could see there was so smoke in his bedroom. Just as he turned to wake Justin, the shrill whistle of a fire alarm exploded through the walls of the Warfield. Justin woke immediately and sat up quickly. For a moment Marcus could see the confusion on his face, and then he turned his eyes on Marcus and stared. The whistle shrieked again and Justin jumped from the bed. Marcus was on the floor grabbing sweats and tees from a dresser drawer throwing them over his shoulder towards the bed.
“Use these,” his only words as he dressed himself quickly.
“Wake up Peter. Get downstairs and out of the building,” Justin ordered as he headed out the door into the hallway dressed in Marcus’s clothes. He went through the connecting door to Peter’s room and roused him, and then Marcus followed Justin instead of his orders to go downstairs.
The smoke was visible in the corridor. Lightly filling the ceiling as Justin and Marcus, who was close behind him, climbed the service stairs up a flight. How Justin knew where to go Marcus had no idea. On the fifth floor, Justin ran towards his own suite which happened to be directly over Marcus and Peter’s suites on the fourth floor. He stopped so quickly Marcus nearly ran right into him. The door was wide open and smoke billowed lazily from inside. The acidic smell was stronger here. It was clear this was where the smoke had been coming from.
The main room was not in flames but smoke burned Marcus lungs as he entered. Now, they could hear the distinct sound of fire and Justin ran to his bedroom door, felt it for heat and then opened the door carefully. He turned back to Marcus, his face looked shocked.
“Under the sink in the kitchenette, there’s a fire extinguisher. Get it,” he yelled over the sounding fire alarm. Marcus did as directed bringing the extinguisher to Justin as quickly as he could move.
Handing off the red cylinder to Justin, Marcus watched as the other man pulled the tab and walked into the room. In the corner by the open French doors leading to the veranda, a trash can was billowing out smoke and flames were shooting upwards. Whatever was in the can was smoking more than burning but it was clearly out of control at this point. Just as Justin stepped forward toward the can, the drapes covering the French doors burst into flames and traveled up the wall. Aiming and applying pressure to the trigger, Justin sprayed the area liberally with the foamy mess spraying from the canister. His aim was straight on and he dowsed the trash can as well as the drapes on both sides of the doors.
Other voices could now be heard rushing around in the hallway outside and in Justin’s suite. Peter’s voice was the loudest.
“Justin! Damn it! Are you in here?” His voice was filled with fear.
“What the hell is going on in here,” he yelled stepping up behind Marcus observing his brother’s attempt at putting out the fire. Just then several more men in fireman’s gear burst through yelling at them to all get out of the way.

Well there you have it. I hope you enjoyed a little peek into Justin and Marcus, with more to come I promise. I am going to be out of commission for about 2 weeks. My parents are visiting from Florida and I am so happy to be able to spend some time with them. I will return with another update after they have made the flight back to their home.

Life is too short not to do the things you enjoy and to spend time with the people you love. Make an effort to do that this week and I think you'll find your world can be a richer place. See ya soon.
CJ
at May 05, 2013 1 comment: