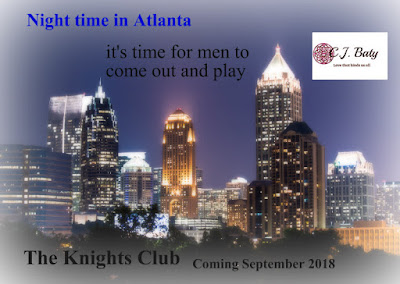 Will be a series of 5 books with stories about the men who work, live and love at the Knight's Club.

Previously owned by Stoney Whitecastle from the Warfield Hotel Mysteries Series, Xavier Knight buys the club and changes the name. An old friend, Damien Fitzgerald (also from the Warfield Series), asks him to give someone a chance at a job.

Enter Sebastian Brady, Seb to his friends, and the Brady family of cops. His brothers Zachary and Malachi, along with his baby sister Katelyn make up the rest of the family.

Join Xavier and Seb as they grow their Knights Club family with an array of characters you are going to love. There's Calypso, Rio, Philip, Robbie and the people they fall in love with too. It's going to be a bumpy ride to happiness for a few of these amazing characters. Come along and enjoy, just be sure to hold on tight!

Book 1 releases, mid September 2018 with a new book in the series releasing approximately 4 to 6 weeks later.

“Sometimes, facing your personal trial could be a life or death situation. Do you have the courage to overcome the obstacles in your life before time runs out?”

Determined to protect his older brother’s wedding, professional chef Jerrick Ramhart makes a deal with his cruel, homophobic parents. One that involves keeping his true desires locked away and deceiving his brother Gerard and his new family in Abingdon. In exchange, his parents agree to leave Gerard and his fiancé Jace alone. Jerrick doesn’t mind the sacrifice, just as long as Gerard gets the happily ever after he deserves. What he doesn’t expect is a fateful encounter with a wild, red-headed pop star. An encounter that threatens to expose Jerrick’s secret life.

Recording artist Adam “Adam Love” Walker is known for living his life the way he wants. Doing and saying whatever he wants and not caring who likes it. Why shouldn’t he? After all, Adam isn’t sure when his life will suddenly come to an end. But after an unforgettable night with a sexy chef, Adam starts singing a different tune. Jerrick is everything Adam wants in a man, but what’s the point of being in a relationship if he can’t promise Jerrick forever?

What happens when polar opposites with secrets cross paths in the most unexpected way? Adam begins to show Jerrick what it’s like to be free, and Jerrick is slowly showing Adam what life has to offer him. As stubborn as these two are, will they learn to accept each other before one of them checks out forever?

*This is Book 2 in the series, but can be read as a standalone story - no cliffhangers*

Well now things were getting interesting. If he wanted us to have alone time, did that mean we were finally going to be together? Or was I reading the situation wrong?

Adam chuckled and slowly headed toward me, like a lion getting ready to pounce on his pray. Adam sure was primal enough to devour me.

Feeling my heart speed up, I began walking backwards until I felt my back against the counter, unable to move anywhere else. But Adam kept coming until his chest was firmly pressed against mine. He was so fucking close his scent tickled my nostrils. He smelled of Cinnamon and…wow…ginger, and it was already becoming my favorite fragrance. Maybe I could bottle it up for myself. Eau de Ginger. Or I could probably make a profit off it.

“What are you snickering about?” Adam asked in amusement.

I chuckled “Okay fine. I was thinking about how good you smell.”

“Oh? Is that right?” Adam purred as he slowly ran his tongue from my left collar bone and up my neck.

“You know what I’m thinking about, Mr. Sexy chef?”

I shook my head since it felt like my voice was no longer available for use.

Gripping my bicep with his right hand, Adam reached up with his left to grip my hair and forcibly tilt my head back. He growled as he bit down on my neck and sucked on the skin.

My mouth hung open as a moan of pleasure left me. My whole body vibrated, and if it wasn’t for him pinning me to the counter I’m pretty sure I wouldn’t be standing up at that moment.

Once Adam was done leaving his mark on me, he licked the dark spot he left behind before trailing his tongue up to my ear and began nipping at my lobe.

“Fuck, Adam!” I whimpered, not caring how needy I sounded.

I was sure if he kept this up I’d end up jizzing in my pants without even touching my throbbing dick.

“I’m thinking that I’m sick of playing games with you.” Adam whispered in my ear.

Adam licked along the ridge of my ear before saying, “I mean that this tip toeing back and forth about our relationship is getting old. I’m fucking tired of waiting. I want you Jerrick. I want you so fucking bad. If you don’t feel the same way, tell me now. Because otherwise, I’m not sure I’ll be able to stop.”

“Want you! Need you! Please, Adam take me! Please!” I begged.

JM Wolf never thought he would one day say that he's a published M/M romance author. Having a poet for a mother and a sister to once ran a blog, it was only a matter of time before JM discovered his writing genes. In the beginning, his sole purpose in life was to be a singer/songwriter. Writing lyrics was the first step putting his thoughts onto paper. Even while singing, JM always found time to dabble with writing little short stories but never thought too much about it.

Once he reached adulthood, his music dreams left him, but not the feeling for writing down what was in his mind. However, that didn't mean music no longer played a part in JM's life. His debut book The Black Feather was inspired by one of his favorite songs. Whether lyrics or love stories, you will always find JM's heart and soul in every word on paper.

JM Wolf lives in Chesapeake, VA with his husband and in-laws. When he's not writing, you can always find reading a good book, spending time with the love of his life, or jamming out to music. He didn't pick the world of literature, the literary world picked him.

I'm introducing my next series today. The Knights Club takes place in Atlanta GA. Some of you, who have read the Warfield Hotel Mysteries Series, will remember the club that Stoney Whitecastle owned, the Gentleman's Club. From this prologue, you learn he has sold the club to Xavier Knight. Though this is not part of the Warfield Hotel world, you may find a couple of the characters popping in during this series.

Prologue
Stoney Whitecastle watched as his friend Xavier Knight signed the last of the documents the lawyer had spread out before them. When Xavier signed the last paper, the club would be his. A season of Stoney’s life would be over. In the bar below the office they sat in, he knew men were meeting other men. Some were looking for love, others only wanted a quick fuck for the night. Some danced, others shared a drink and talked quietly. Things would go on just the same with Xavier at the helm.

He was just twenty-five when Stoney opened the club. The years since had changed many things for gay men. More men were living openly in their communities, at their jobs and within their families. In the deep south, there were still stigmas associated with being gay, but Stoney admitted it was better.

Not like when Stoney had first realized his own inclinations. At that time, it was all back alleys and cheap seedy hotels. One offs with men you never even had a name for. It was dangerous and an adrenaline rush at the same time. That was until, men started dying.

Stoney had lost count of the men whom he had counted as friends, who had lost their lives to HIV and AIDS. He knew he was damned lucky that he’d survived without experiencing the touch of death’s hand. For a man his age, passing the sixty mark, he was healthy and fit, but alone. He hadn’t planned on that.

He missed Ian. The two-year anniversary of his partner’s murder was approaching. The first year after Ian was gone, Stoney didn’t come to the club. His assistant manager had taken over and ran everything. He traveled for a while. Anything to stay away from the places that reminded him of Ian.

After a while, he had to come home and face reality. The house he’d shared with Ian in Miami wasn’t home anymore, so he sold it. The condo in Atlanta held fewer memories, so moving back into it made more sense. Justin Warfield and his brother Peter invited him to the Warfield Hotel often, but he just couldn’t face going to the place where Ian had been killed.

Time had healed a lot of the pain. When he thought about Ian now, it was more about missing him in the everyday little patterns of their lives. Stoney knew he was too old and not lucky enough to find that kind of love again. Selling the club had been the last piece of Ian’s life that he had been holding on to.

“So, what are you going to do now,” Xavier asked while the lawyer arranged the papers into three piles.

“I’m taking a Pacific Ocean cruise. It’s leaving from San Francisco next Friday and I won’t be back for three months,” Stoney answered.

“Here you go gentlemen.” The lawyer handed each of the men a folder with the papers neatly stacked inside. He shook hands with Stoney and Xavier before he left the office.
“Have a drink?” Xavier asked. “It’s on the house.”

“Thanks, but I’m going to pass and go down the backstairs, if you don’t mind,” Stoney hugged Xavier as he spoke.

“I’ll take good care of her,” Xavier offered, as they broke their embrace.

Coming September 2018
This will be series of 5 books. Each one about a different character who works at the club. This is a diverse and mixed bag of people. They are all novella length, approximately 25,000 words. Contemporary Gay Romance with extra heat. I am also planning a FM story in the mix as well. I plan on releasing one book a month starting in September as strictly e-book format.