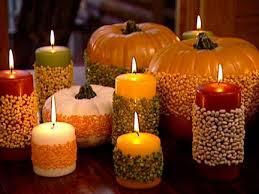 This has been a weekend of work and enjoyment. The weather is finally beginning to feel like autumn. The trees are still very green but the air is a little cooler in the morning and in the late evening. The AC doesn't kick on nearly as much as it did a week ago. My sinus's are thankful.

I finished the second book in the Knights Club series today. I'll be sending it off to my wonderful editor for polishing tomorrow. Calypso's story is different than Xavier and Seb's but then that's what makes this series so interesting. Each book stands alone and focuses on two different MC's but they are still all intertwined with the club and the people who work there. They are a family, much like any family the members are diverse in their characteristics.

They love different. They hurt different too. I'm learning a lot from these characters and I'm excited to bring them to you.

Looking forward, October is going to be a very busy month. I'm so excited to be a featured author at GRL (Gay Romance Lit) this year. It will be my first GRL. So many people all gathered together in one place because of their love for LBGQT literature. Some of my favorite authors will be there and I get to be a fangirl for a little while.

Then the holidays will be here before you know it. I hope your week is a good one filled with lots of fun and good weather.

***SPECIAL OFFER***
Follow me on Bookbub and I will send you a free copy of "A New Dream". Just leave me a comment with your email address and I'll send it to you. 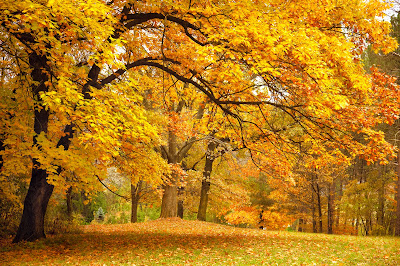 It's almost that time of year again. In a few weeks, if the weather continues to turn cooler, our street will be lined with trees like the ones above. When I visit our place in Tennessee, the air smells crisp and fresh too. It's like Mother Nature is giving us the beautiful cascade of colors before the cold gray of winter seeps in.

This past week was a hard one. Life can sometimes take us by storm. Decisions need to be made. Unexpected bills fill our mailboxes. It's life. Good things happen too. I've been so blessed that my new release, Starting Over, has done so well. I've had amazing reviews and some not so amazing. But, someone is reading my work and that's what matters to me.

I'm getting to attend my first GayRomanceLit event. Riding the waves of excitement and scared "well you know what". As much as I love to meet readers and other authors, this event is huge for me. I'm used to being one of a handful of M/M authors at a venue. GRL is all authors with a heart for the LBGQT community. I'm just a little dot on a big card at this event. I'm also a fangirl of some of the other authors as well. They've encouraged me with their skill and their words.

Today we celebrated my husband's birthday and next week we will celebrate 43 years of marriage. What a milestone for a couple to achieve? It's never been easy but it's been worth it.

So on this Sunday, I guess I'm just reflecting on things happening now and things to come. What causes you to reflect?

This is Xavier Knight and Sebastian Brady's story. 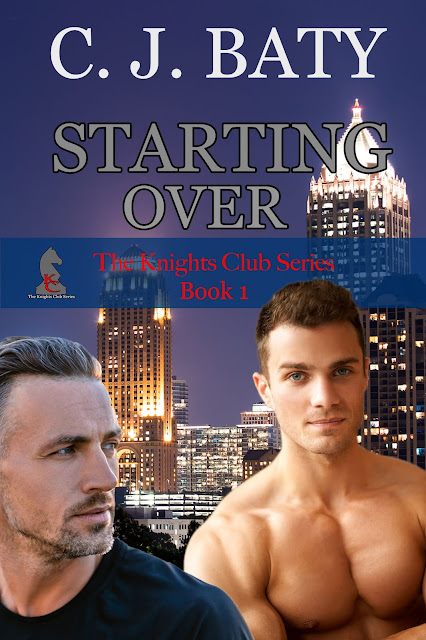 Xavier Knight was starting his life over. A new city. A new club. The past was gone, and he had everything to look forward to… except… love. That ship had sailed, never to return. He was too old to play the games or stack up the one night stands. Until, an old enemy’s son walked into his club and his heart.
Sebastian Brady was through. Through with hiding who he was. Through letting his brother officers dictate his life. And completely through, with his family telling him who he was. He turned his back on his badge and his family’s heritage in the Atlanta police force. But, he never imagined that he’d be serving drinks in a gay bar and working for the hottest silver fox he had ever seen in his life.
Xavier and Seb have a lot to learn from each other. Hopefully, their growing love will survive Xavier’s past, Seb’s family, and a host of characters with secrets of their own, who all work at the Knights Club.

Welcome to the club

See Me by Melanie Jayne 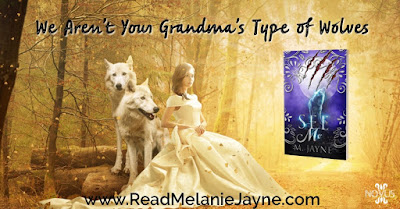 
Tagline: These Aren’t your Grandma’s Type of Werewolves


Throughout history, The Lady, Goddess of the Lycan world, has gifted werewolf packs with humans who carry her mark. Theodora Morrissey’s plans to return to college for her graduate degree are ended when she is awakened by an otherworldly voice on a rarely used airstrip in Nebraska. Injured and disoriented, she has no idea the discoloration on her back has marked her as a Seer, and that she is now a possession—and the prisoner—of the Novus Pack of Lycans.

To the Novus pack, the word of their leader, their Laird, is the law. With compelling gray eyes and long dark hair, Raider Black rules his pack with intelligence and ruthlessness. To cement the security of his pack, Black has committed to mate another Packleader's daughter. But he’s finding it impossible to fight his attraction to the pack’s alluring new Seer, claiming her as his own.

Sweet, fearless, and unintentionally funny, Theo upends Black’s world and pushes the boundaries of his rules. How far is Raider willing to go, and what will he sacrifice, to save both his pack and the human Seer who’s found a way not only into his bed, but his heart? 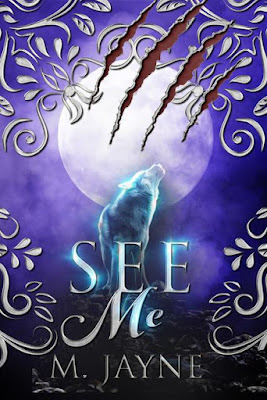 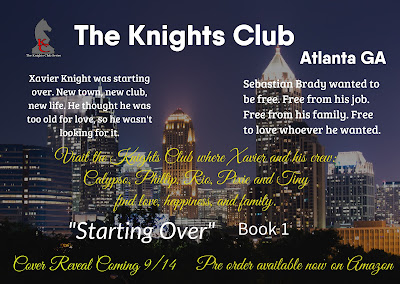 Just a few more days until the cover reveal for Starting Over Book 1 in the Knights Club Series. Release day is September 18.
at September 08, 2018 No comments:

Starting Over (Book 1) The Knights Club 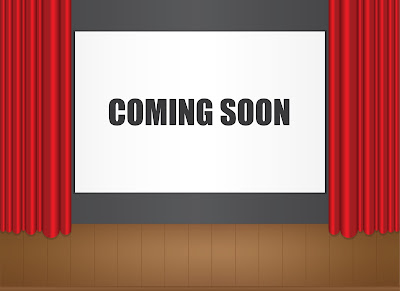 I am so excited to announce the release date for Starting Over book one in the Knights Club Series. The cover will be revealed on September 14, 2018. The pre-order will be available on Amazon in the next day or two.

In addition to the first book, I am also announcing the approximate release dates and the titles to the rest of the books in the series.

All the stories will be in e-book format and available across all book selling sites. (Look for buys links for Starting Over very soon.)

I hope you enjoy getting to know Xavier Knight, Sebastian Brady, his brothers and the cast of characters who work and love at the Knights Club. They are family and like all families, sometimes there's a little angst mixed in with the love.