Hi everyone, Just wanted to bring you a review I just did for a book I read over the weekend. I highly recommend this story as a quick, light read packed full of action and sexy goodness. Please check it out. 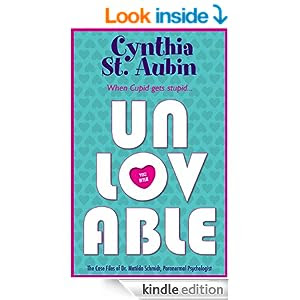 This is a very fast moving, funny, sexy story. The author grips you from the very first sentence "I could smash it with a hammer" and pulls you in for the ride. You've just got to find out what the heroine Matilda Schmidt is so amped to dispose of in such creative ways. The story moves from one scene into the next flawlessly and the characters develope nicely as you move along.
The sex scenes were well written and the playful kind that make you just feel good when you read them. Oh and Cupid is probably one of the most interesting and funny characters I've read in a long time.
I wanted to know more about the characters; Matilda, Cupid, Liam and Crixus all had very interesting backgrounds that left me wanting more. I would have loved to read a much longer story here.
All in all it's a great read or story to listen to, which is what I did. Driving back from a mini vacation over the weekend, I turn on my Kindle Fire and listened to the story while I drove. Kept me chuckling for many miles. I'm looking forward to reading more from Cythnia St. Aubin and Matilda in the future. 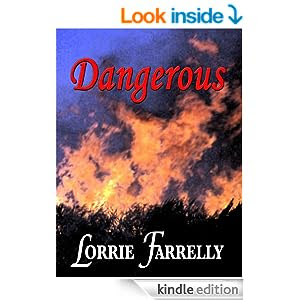 Here is my review for Dangerous by Lorrie Farrelly

At first glance if you aren't used to reading a story in multiply points of view, you may have a hard time getting into this story. Don't quit, keep going, it's worth it. What you will find is a story about two very wounded people. Both determined to never make the same mistakes again, therefore avoiding the hurt they've suffered in the past. In doing so, they almost miss out on the love they were always meant to experience...together.

Cam Starrett is a broken police officer who has seen too much death and destruction by humans against other humans and who has an ex-wife who nearly destroys him with lies and deceit. He takes the  job of Chief of Police in what he assumes is the sleepy little village of Chima Valley. What he finds is a mayor who thinks he owns the town and everyone in it,  including the police department and a hidden hotbed of bigotry and hate. And then there's Meredith (Merry) Hayden, the high school guidance councilor. She brings an entirely different set of problems.

Merry Hayden makes the mistake of trusting the wrong man with her innocence, like so many other girls their first time away from home. When a popular and good looking boy at college, paid Merry the kind of attention the shy bookish girl had never had, she mistook it for love. The hit to her fragile ego,  with his eventual clear dismissal of her after raping her, was devastating.  Leaving her unable to trust anyone even herself. Cam Starrett drew her like a moth to a flame and scared her beyond words.
Being determined to stay from the other, did not work for either of them. Drawn to each other through the near devastation of the small town by hate filled teenagers on a rampage, Cam and Merry can't help themselves.

Ms. Farrelly's descriptions of the Chima Valley area make a visual that is both breathtaking and horrifying when a fire rages through it. I felt as if I was there seeing the fire and it's destruction through the eyes of the characters. She also paints secondary characters that come to mean a lot to you as well in this story.


Also, I found the Epilogue extremely satisfying in the way Ms. Farrelly found HEA's for more than just her two main characters. A very good read.

I just wanted to say thank you to everyone who stopped by to check out the wonderful books available at the Book Blast Carnival. It was a pleasure to host and I hope you all enjoyed it. Check back here to see my reviews on some of the books mentioned on this tour. Have a great weekend everyone!
CJ
at March 01, 2014 1 comment: