It's been a while since I posted so I thought you might like a little teaser of my recent work in process. I haven't decided on a title yet but I can tell you that this is going to be in a summer release anthology. Here's part of the first chapter for you to enjoy.

Chapter 1
How had I let myself be talked into this trip? Nellie, my twin sister, had somehow gotten it in her head that I needed some sort of an intervention and here I was.

"You are depressed, Gar! That Jackass screwed you over. Cheated on you from the very beginning and left you hurt. Really hurt. It's called d-e-p-r-e-s-s-i-o-n." She spelled the last word slowly.

"So you're going on a short vacation with me. We're going to lay in the sun, get massages on the beach, dance the night away and hopefully you'll get you laid!" Determination was my sister's middle name.

What the hell getting me laid had to do with anything, I didn't know. I could get laid on my own right here at home, thank you very much. Truth was sex was not the problem. Sex was easy. Love...commitment...those were the hard things. Even harder, finding someone who wanted those things too. That was the real issue. If anything, that was why I was in such a funk but I was not depressed.

I had made the idiotic mistake of thinking that Bill Tolsen was the one of those men who felt the same way I did about relationships. Long term...grow old together relationships. He wasn't. I would have kept living my happy little domestic life if a barely twenty-something blond haired, blue eyed boy hadn't come looking for "Billy" at my door one evening.

During the brief chat with "Mitchie", realization dawned on me that "Billy" had been screwing said Mitchie and several of his friends on a regular basis for several months. I guess you could have said I was in shock but it felt more like the implosion of my life.

Nellie had made quick friends with the other three women on our plane from Miami to the island. They were previous guests on a return visit and were excitedly telling Nellie about the clubs on the island and several of their favorite things to do.

"Gar," Nellie said shoving my shoulder. "Snap out of it and look out the window."

Leaning to my right, I glanced out the planes tiny side window. My breath caught in my lungs as I took in the view below me.

"Isn't it gorgeous," Nellie whispered as she wrapped her arm around my shoulder.

It was. A turquoise blue ocean surrounded the small lush green island. White sandy beaches were clearly visible circling the entire isle. The main lodge of the resort seemed to blend into the tropical jungle surrounding it with small thatch roofed huts dotting the edge of the beaches.

It was like something out of a magazine. I'll admit I had never even looked at the brochures Nellie had given me, but no picture could have done justice to this scene of paradise.

The plane landed on a small private airstrip on the north side of the island. A large open tram was waiting for us along with a young man dressed all in white. His name tag said Ernesto and he loaded our baggage from the plane onto the back of the tram.

As we traveled, Ernesto was quick to point out shops along what appeared to be a main street type avenue. He mentioned the side road leading to the outlet mall, arcade and aquarium. He told us a shuttle went back and forth several times a day from the resort to the main strip and shopping areas for guests to use. The girls started asking questions about the local night spots and attractions and my mind shut down.

I had become engrossed watching the action going on across the ocean waves. There was a guy on a jet ski slicing through the water like a hot knife through butter. He was very close to the huts that jutted out into the turquoise sea. The sun was reflecting off the water and jet ski making it hard to ascertain specifics about the rider. He wore dark Ray Band sunglasses that shielded most of his face. But it wasn't his face that had me practically drooling as the tram drove by slowly.

The size of his biceps  and massive expanse of his chest had my full attention. He wasn't a body builder type but you could tell he took care of himself. His skin looked smooth as silk and hard as steel. My fingers involuntarily flinched with the need to touch. His hair was wet so I couldn't really tell the shade of brown it was, but it lay in soft waves all over his head just touching his shoulders. Moving closer to the beach, he sped past the tram one more time. He waved and smiled showing even white teeth in his tan face. The girls on the tram who had been chatting nonstop with Nellie became silent.

Just a quick pop in to say hi and remind everyone that Tiffinie Helmer's latest book "Reel Trouble: Wild Women of Alaska Series" is still available for $.99 at amazon. Check back here tomorrow from my review. 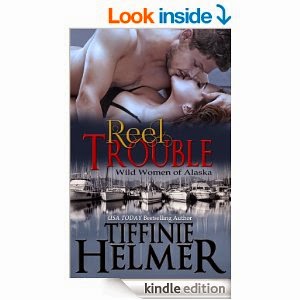