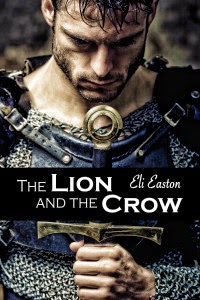 The Lion and the Crow by Eli Easton

I don't usually read historical romances of any kind but something about this story just called to me when I read the blurb. I am so glad I decided to give it a try. This is the first book by Eli Easton that I've had the pleasure to read. I can assure, it won't be the last.

Miss treated and unloved by his own family Sir Christian Brandon, the youngest of seven brothers, learns at an early age that he can not rely on anyone ... especially God. He knew the growing need in his belly for another man's touch made him an abomination to the world he lived in. 1300 England did not look kindly on sodomites. But one look at the older hansom knight, Sir William Corbet the Lion, confirmed what Christian had always known about himself. He'd never wanted anyone as much in his life as he did William.

Sir William Corbet, knight and warrior, needed an army to rescue his sister from the tyrant of a husband their father had given her to. What he got was Christian Brandon the Crow. Christian was far too pretty and William begins to feel things he had long suppressed. What he didn't expect was to come to admire Christian for the hard working, honorable knight that he was.

The two take a long and perilous journey to rescue Lady Elaine and along the way, love ignites and desire burns bright between them. Though William doesn't believe there is any future for them, he is content for what they have at the moment. Christian wants more, so much more. His nick name might have been "the Crow" but he was brilliant and cunning was not about to give up the only piece of happiness he had ever known in his life.

The story is the perfect M/M romance for someone just beginning to read this genre or for the seasoned reader who just loves a love story. The sex is fresh and sweet because they are both learning their way, neither one experienced in the way two men can share their bodies. I'm giving 5 rainbow flowers because it was a well written story, with a few surprises and twists that only added to the story and well developed characters that grew and became so much more by the end.

Another weekend has come and gone! I'm struggling to get back into the writing mode and along with that comes the doubts! You know the ones, where you think, "me an author, who am I kidding?" Then I pick up something I've been working on for several months again, re-read it and looks for editing errors and realize, "Hell yeah, I'm a writer because I want to know what happens to these characters and no one else is going to write this but me!"
So here is a snip it of Crashing Waves, the second book in a series tentatively titled The Warfield Hotel Series.


The room whirled and stars danced before his eyes. Angrily, he wondered when this dizzy shit would be over. Everything he'd eaten suddenly felt like lead in the pit of his stomach. As soon as his stubborn ass stood, he knew it was a mistake.

He'd never realized just how hard...hardwood floors were until he started falling on them. It was somewhat of a relief to know that the dizziness was less when he was laying in a crumpled mess on the cold hard floor. The bedroom door opening suddenly and slamming against the wall behind gave Justin a start.

The look of interrupted sleep and distress mingled in Marcus's eyes. A dark shadow beard covered his lower jaws on both sides of his face. Briefly Justin wondered low rough it would feel against his own skin. He shook the thought off and continued to stare up at Marcus from his prone position on the floor.

"What the hell are you doing?"

Marcus's attitude did not help the situation and only caused Justin to become angry. It was anger directed at himself not at Marcus, though when he spoke Marcus flinched.

"I was trying to go pee!" Justin answered bitterly.

"On the floor?" Marcus chuckled as he came to kneel down beside Justin. His hands, gently slipped around Justin's waist and helped him to his feet.

Once on his feet, Justin extracted himself from the warmth of Marcus's touch. He saw the look of hurt cross Marcus's face and quickly disappear.

"Do you need to..." the question was left open ended.

"No. I can handle this," Justin answered quickly. "The dizziness seems better now."

Justin headed toward the bathroom one slow step at a time. Grateful that Marcus was there but that he didn't hover over him made the trek a little easier. Justin managed to take care of things without falling again. Lifting his mood greatly. Returning to the bedroom to face Marcus didn't seem so bad. Hell, who was he kidding, it was that bad.

Marcus hadn't moved from his spot, leaning up against the footboard of Justin's king sized sleigh bed. A glance at the red numbers on the clock by his bed, read eleven thirty. It had been a long day.

"Do you need anything else," Marcus asked as he pushed his ass off the bed.

"Okay, good night and you can yell if you need me...any help," Marcus corrected his words cautiously.

Justin found that the words were stuck in his throat so he just nodded his head. If he were being honest with himself, he wanted to talk to Marcus. Wanted to know how things were going for him. Had he moved on? But Justin knew, he didn't have the right to ask any of those question. God help him, but he wanted to know. He knew they needed to talk about a lot of things but where did he start.
Marcus turned and headed toward the bedroom door. He stopped, took a deep breath and turned to face Justin again.

"I almost forgot. Robert Wyler called earlier. You were still pretty knocked out," he said, then chuckled. "He wasn't too happy that I answered the phone. He said to tell you he'd call back tomorrow and," Marcus hesitated then added, "He said he'd take a rain check on your date."

Justin felt the heat flood his cheeks. Damn it. He was forty years old. He shouldn't be blushing or even embarrassed for that matter. Before he could say anything, Marcus opened the door, stepped out into the hall then said over his shoulder, "I'm glad you are stepping out of that self imposed closet you lived in for so long. Too long. Robert is a lucky man." He never looked at Justin, just said that and closed the door behind him.

So what do you all think? I'd love some feed back on this. Drifting Sands (Book 1 in the Warfield Hotel Series) is in the hands of my wonderful publishers and I should be sharing good news soon about it's release. Let me know what you think about Justin and Marcus.

As we move forward into the new year, I would like to take a moment to reflect on my list of favorite reads from 2014.

2014 introduced me to several new to me writers and their stories. It also brought new reads from some of my go to authors. All of which gave me a very fulfilling reading experience for the year. This isn't the complete list by any means of the number of books I read last year. They are in no particular order because I didn't have the heart to rank any one above the others.

While most of my reads are definitely M/M, you will note the inclusion of stories by Tiffinie Helmer and Victoria Danann. Both of these ladies are long time favorites, who write stories with characters who draw you in and capture your heart.

All of these stories would get a 4.5/5/5.5 rating from me. If you've already read them...lucky you. If you haven't please give them a try, I promise you are in for a real treat.

I started out to write a small description on each of these books and found, I couldn't. I mean literally, I couldn't write something "short" about them. It just wasn't possible so I didn't even try. You'll just have to read them for yourselves.

Happy 2015 and may all your reads be great ones!