Something amazing to share today. Beautiful Thunder by Louise Lyons is now available. 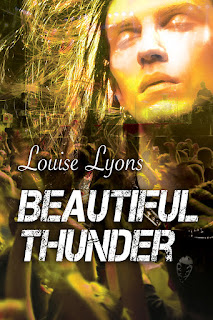 Blurb
Can romance and rock ‘n’ roll dreams survive with a storm raging around them?

Alex Randall has always wanted to be a rock singer. When he answers an ad from a local band, his dream finally comes true. He loves the stage, and the group’s fans love him. Things couldn’t be better, except for the attraction he develops for the band’s guitarist, Lindsey. Alex is surprised and initially worried, since he only had one brief flirtation with a boy in his teens. But even though he and Lindsey become close and start seeing each other, Alex fears commitment, and Lindsey worries that Alex might only be experimenting.

When Lindsey’s ex contacts him following a health scare, fear and anger drives a wedge between Alex and Lindsey, which causes rifts within the band. Alex and Lindsey’s relationship is still new and fragile, and with Alex unwittingly blaming Lindsey for their problems, it becomes a true challenge for them to weather the storm.

I tried knocking on Lindsey’s door again and even rattled the letterbox, but he didn’t answer. I went back to the car and sat in it for a while, staring up at the windows and watching for some kind of movement, but there was none. In the end there was nothing for me to do but leave. I drove to Mark’s rather than go home. I had a sick feeling in my stomach that something might have happened to Lindsey, but for once I didn’t want to suffer alone. At least now Mark and Ricky knew I was going out with him, I wouldn’t have to hide my miserable face.

“I rang him last night and this morning,” I said for Ricky’s benefit, in case Mark hadn’t told him that. “He didn’t answer, and his flat’s all locked up and the curtains closed. The neighbor said he thought he was in.” I frowned, wondering why Lindsey would have been out in the evening. “He said Lindsey came back in about nine o’clock. Lindsey never said he was going anywhere.”

“He probably went to meet one of his friends,” Ricky said. “He hangs out with that Daz quite a bit.”

I vaguely remembered Daz from Nero’s. I thought Lindsey would have told me if he planned to go out, but I wasn’t his keeper. We were close, but we still did our own thing sometimes. Then a prickle of alarm ran up my spine and made me shudder. Could Steve have done something to him after all this time? It had been months, and the man seemed to have accepted he and Lindsey were over, but it was all I could think of.

“What?” Mark asked. “What are you thinking?”

“Steve. Do you think…? Hell, it’s been months, but the man was a twat. He….” I bit my lip. I couldn’t get the image out of my head of Lindsey, beaten and bleeding, when I found him before.

“Go on. We know something happened, but Lindsey would never tell us,” Mark prompted. “It was around that time Lindsey had the flu, when he stayed with you.”

“He didn’t have the flu,” I said before I could stop myself. “Steve beat him up. He didn’t want you to know.”

“Fuck!” Ricky spat. “That bastard! Do you seriously think he might have gone after Lindsey again? He was the jealous type.”

“Yeah, but he knew about us, and he seemed to accept it. Do either of you have a key to Lindsey’s place? He’s always at mine, so I don’t.”

“No.” Mark shook his head. “I’ll try ringing him again. Hold on.” He went into the kitchen and tried Lindsey’s number, but reported there was no answer.

Mark and Ricky nodded. Both looked as worried as I felt. My guts churned as I drove back to the Park as fast as I dared. I told myself I feared the worst and there was probably nothing wrong. He might have overslept and not heard the phone or the door. He could be trying to ring me right now and wondering where the hell I was.

I ran into the building and up the outer stairs to my door. Fumbling my key into the lock, I cursed as it wouldn’t turn, until I realized it wasn’t locked. I burst through the door, and there was Lindsey, curled up in a corner of the couch in the living room. I sagged with relief. Lindsey glanced up briefly but then ducked his head down. He looked awful, as if he hadn’t slept. The paleness of his face seemed exaggerated by the purple shadows under his eyes, but it wasn’t makeup.

“Lindsey, are you okay?” I hovered in the doorway. Lindsey shook his head but didn’t speak. “Give me a minute. Everyone’s worried about you.” I grabbed the phone and dialed Mark’s number. He answered on the first ring.

“I’m not sure. Doesn’t look like he’s been hurt. I’ve gotta talk to him. I’ll speak to you later, okay?” I hung up before he could reply and went to sit beside Lindsey. He didn’t move or look at me. He just stared down at his legs, which were folded in front of him. His boots lay on the carpet next to the couch. “What happened?” I asked. “I went to your place. Were you there?”

“Who?” Lindsey glanced at me with a frown.

“Your neighbor? He said you’d been out last night and you got back around nine, but he hadn’t heard you go out.”

“Where’d you go last night?” I touched his arm. “Did you see Steve?”

“What makes you say that?” he asked, startled.

“It was all we could think of. We thought something might have happened to you.”

“Did you tell them?”

“Doesn’t matter.” Lindsey let out a long sigh and unfolded his arms. He pushed his hair back from his face. It looked as if he hadn’t washed or brushed it that morning, and that was unheard-of for him.

Lindsey laughed. It wasn’t his usual deep chuckle, but a cackle that sounded a touch hysterical. I didn’t know what to do—whether to give him space, or cuddle him, or shake him and try to make him talk. I sat there, twisting my hands together and watching him until he finally met my eyes. “Steve rang me yesterday. He wanted to talk to me about something and asked to meet me.”

“Yeah, I went. We met up at Forest Recreation Ground.”

“What?” I gasped. “Why would you do that? What if he’d done something to you? Did he do something?”

Lindsey shook his head. “He just talked. It was fine. Well, it would have been fine if….” He broke off and looked away again. “Fuck. He, um, he’s HIV positive. He hasn’t slept with anyone since we broke up.”

Author Bio
Louise Lyons comes from a family of writers. Her mother has a number of poems published in poetry anthologies, her aunt wrote poems for the church, and her grandmother sparked her inspiration with tales of fantasy. Louise first ventured into writing short stories at the grand old age of 8, mostly about little girls and ponies. She branched into romance in her teens, and MM romance a few years later, but none of her work saw the light of day until she discovered FanFiction in her late 20s.

Posting stories based on some of her favorite movies, provoked a surprisingly positive response from readers. This gave Louise the confidence to submit some of her work to publishers, and made her take her writing “hobby” more seriously.

Louise lives in the UK, about an hour north of London, with a mad Dobermann, and a collection of tropical fish and tarantulas. She works in the insurance industry by day, and spends every spare minute writing. She is a keen horse-rider, and loves to run long-distance. Some of her best writing inspiration comes to her, when her feet are pounding the open road. She often races into the house afterward, and grabs pen and paper to make notes.

Louise has always been a bit of a tomboy, and one of her other great loves is cars and motorcycles. Her car and bike are her pride and joy, and she loves to exhibit the car at shows, and take off for long days out on the bike, with no one for company but herself.