Look what's live! Hot Summer Nights 2! You are going to love the new stories! Check it out! 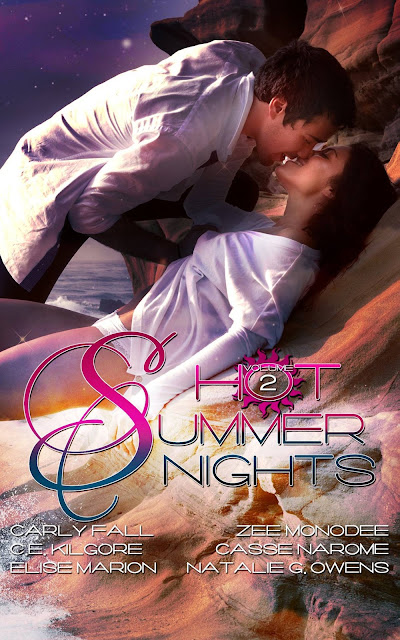 Welcome to the second book taking place on Dasia Island! In these six short stories by bestselling and award winning authors, passion ignites between people from all walks of life, with stories ranging from romantic comedies to paranormal love stories.
The Stories:
Gold Digger by Elise Marion: A hardworking man, Derek Brown has always dreamt of owning his own business someday. Now that his goal is nearly within his reach, the last thing he needs are complications. Yet, one very beautiful distraction named Chantel Green will prove too hard to resist. On the surface, she seems like a shallow gold digger, milking her rich boyfriends for cash and material things. Yet, when he delves deeper, Derek will discover than Chantel is not at all what she seems. Even so, their differences might be too great to overcome. That doesn’t stop Derek from hoping he can convince Chantel to abandon her superficial lifestyle for something real—a life that just so happens to include him.
Walk of Shame by Casse NaRome: Fokai enjoys the simple life. He works hard to take care of his younger sisters, and that's all he wants. Until Stephany Larks struts into his life.
Stephany is an overworked model from New York who's looking forward to unwinding before her new modeling agency opens. The last thing she expected was to meet Fokai and fall for his native charm.
Stephany can bring the right amount of chaos into Fokai's life . . . unless he blows it first.
The List byC.E. Kilgore: Samantha hasn’t had much luck when it comes to love. Of course, she’s never had much luck, period. Known as the Queen of Catastrophe, introverted Sam thinks her luck might be changing when she wins an all-expenses paid trip to Dasia Island. With a crazy to-do list written by her best friend Jack, Sam sets off on her first real adventure in years. After a stuttering start involving food-poisoning and a run-in with a very large spider, she meets Jason, the guy of her dreams made real. As the list gets checked off, item by item, Sam wonders if Jason can help her check off item twenty-two, which involves surf, sand and someplace secluded.
In Perfect Harmony by Carly Fall: Lyrik Perry, head of the band Moonlit Road, is ready for a vacation after the band’s year-long tour comes to an end. Wanting to get away from the temptations of drugs, sex and rock n’ roll all around him, he remembers a time five years ago when he’d truly been happy—on Dasia Island—and decides to go back, hoping he’ll find the woman he left behind, but never forgot.
Harmony Ryland has suffered a debilitating loss. After overcoming her shock of Lyrik stepping back into her life, they share the memories and laughter of their past.
As one of Dasia’s mysterious legends comes true, it helps Harmony move on. Yet, a phone call forces Lyrik to make a decision: does he give up his band, or Harmony?
The Crossroads of Broken Dreams by Zee Monodee: Dr. Owen Cairns has loved and lost--until the day the sea washes his missing wife back into his life.
But Thea is no human. She is Princess Estee, the future queen of the Elemental world of Edoras, and only here on Earth to bring her children back with her to inherit her legacy.
Evil is coming to all the planes of Earth, and war is brewing. There's no place in Estee's life for Owen. But Fate has other plans when he tears through the rift to follow her to Edoras. Can they pick up the pieces of a marriage doomed from the start?
Finding Her King by Natalie G. Owens: For otherworldly King Koras, death is only the beginning.
Nerissa Morgan was once queen of the noble Elemental kingdom of Edoras but all she wants is to blend into the earthly plane she now inhabits. When the ocean brings her the greatest gift of all one sultry evening on Dasia Island, the experience is bittersweet.
The greatest challenge of all faces the former royals. Will Koras and Nerissa regain the love they shared before death tore them apart?
Whitney DeBoe Corinne Kilgore Casse NaRome Regina K. Ryals Zee Monodee Natalie G. Owens Christy Sloat CJ Baty Peggy Sue Martinez Christina Silcox