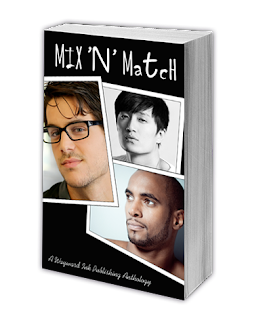 Jayden is here to win. He has to repeat that in his head every time he finds himself flirting with Rawiri throughout the day—it’s definitely flirting, he’s sure of that now. They keep gravitating toward each other amid the din, leaning close to shout over the roar of machines, a hand to the other’s elbow or arm or hip, whatever’s in convenient reach. Rawiri’s eyes rake over him. Jayden blushes constantly and giggles like a teenager. It would be embarrassing if it didn’t feel so good.
“You two must have met before today,” says Alda, the Danish competitor, during an afternoon snack break behind the stage. The other competitors include a South Korean woman and a man from Hong Kong, plus an Argentine who’s wandered somewhere else for his break. All speak English but the man from Hong Kong, who keeps a translator by his side—though both Jayden and Rawiri find it easier to speak Spanish with the Argentine.


They end up telling Alda how they met, finishing each other’s sentences when she asks for more details. As the conversation progresses, Jayden gets this weird sense of déjà vu. He realizes it’s because they sound like one of those old married couples in When Harry Met Sally, recalling the story of when they first fell in love.