Their conversation quickly came to a halt when a familiar voice caught both brothers off guard.
“Goddamn, can’t you Warfield boys stay out of trouble for more than a day or two,” Chief Moses Lee said, clearly not expecting an answer.
“Who the hell called you?” Justin asked as he glared at the big black man. This was the last person on earth he wanted to see in his hotel again.
“I called him, Justin. We all know someone is causing this shit, and he needs to do something about it,” Robert answered, joining the group gathered in the bar.
Robert looked toward Justin. A subtle grin spread across his face. Justin felt his cheeks flush, and he turned away quickly to face Chief Lee.
Moses Lee took out a notebook and walked around the room. His boots made squishy sounds as they tramped across the damp carpet. He stopped in front of the large plate glass mirror behind the bar. He made a few more marks in his notebook then closed it.


“I’ve got a forensic crew on the way, though I doubt we’ll find any prints. Don’t start your clean up until they’ve finished. I’ll have them take several shots of the message,” he said as he pointed his notebook at the mirror. “Seems like you’ve made yourselves an enemy.” 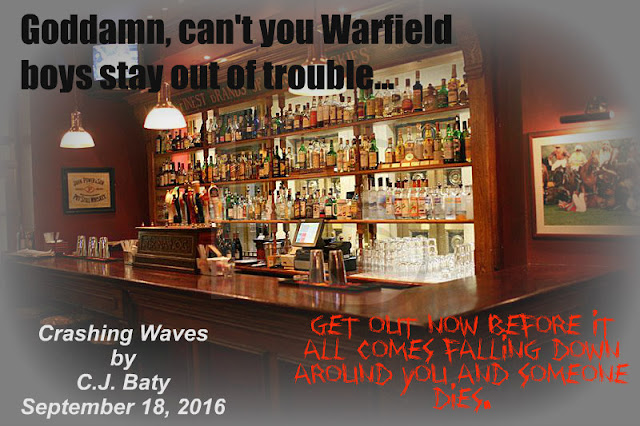