A new book is always exciting. It's exciting for you the reader and it's exciting for the author to be able to share their work with you. I know some of you have been patiently waiting for Crashing Waves, the second Warfield Hotel Mystery, to be available. Thank you so much for that patience. I think you are going to love this continuing story of Justin Warfield and Marcus Drummond. Here is the first teaser for you. 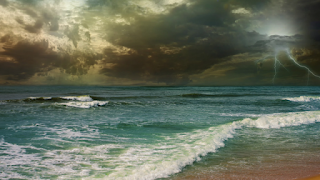 Justin Warfield wrapped the blanket tighter around his body. Though the ocean didn’t quite reach the dune where he sat this early in the morning, the air was chilly and damp. It was mid-October, and the beach was deserted. Even the locals didn’t spend much time here at this time of the year. Waves crashed and pummeled the tiny shells and rocks into submission along the shoreline. Seaweed and driftwood littered the sandy beach going north and south as far as he could see.

The sky was overcast, gray. Dark clouds sure to bring a heavy rain storm later in the day matched Justin’s mood and his thoughts. Not for the first time, Justin realized this place—the ocean, the beach, the dunes—were a part of him. At any given time, he could come here and he see his life played out in nature. He picked up a nearby stick and began to draw circles in the sand by his feet. His shoulder ached, a constant reminder of the events from the past summer. His thoughts drifted exactly where he knew they would. He didn’t want them to go there, but it was no use to try to stop them.
at September 06, 2016